FDA data show that the agency conducted far fewer facility inspections in March 2020 than any other month in the last decade, reflecting the extent to which COVID-19 is impacting some routine regulatory activities.

The number of FDA inspections of pharmaceutical and medical device firms plummeted to record lows in the first quarter of 2020, reflecting the expansive impact that COVID-19 is having on the FDA’s ability to conduct oversight of domestic and global product manufacturing, according to an AgencyIQ data analysis.

In the first quarter of the year, the agency conducted just 243 inspections of pharmaceutical firms and 257 inspections of medical device firms—down from 383 and 362 the previous quarter, and lower than any other quarter since at least 2009, the earliest year for which full FDA data are publicly available. 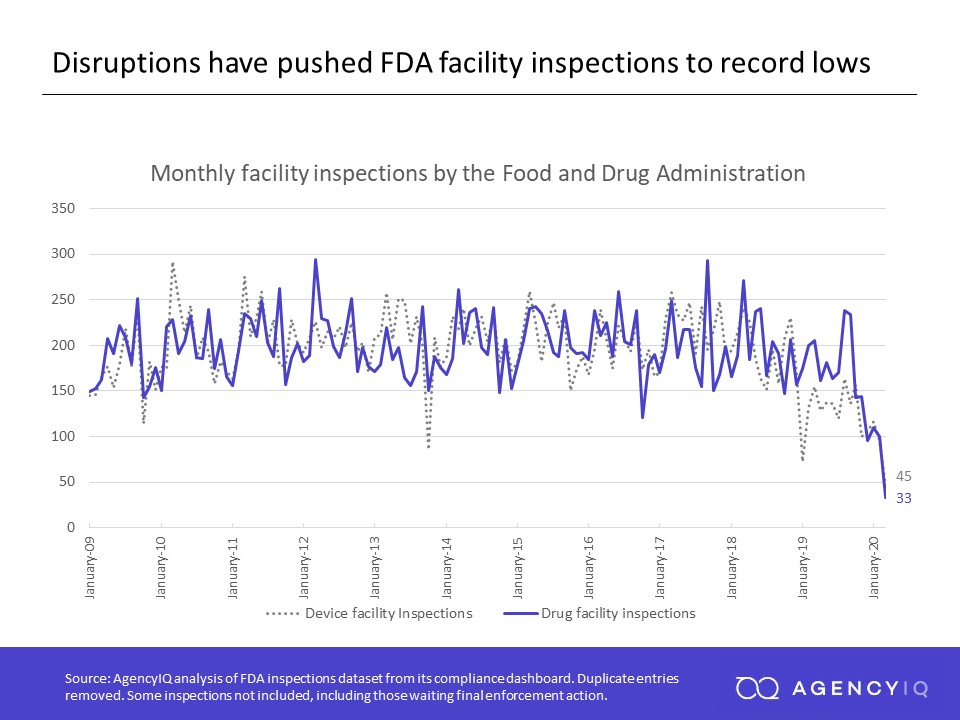 During no month in the last decade has the FDA conducted fewer facility inspections. The only time it came close was in January 2019 when the agency was subject to a month-long government shutdown. A similar shutdown in October 2013 also resulted in a plunge in inspections.

However, the true number of inspections conducted by the FDA was likely even lower, as the data only indicate when the inspection “end date” was, and not the first day of inspection. According to FDA spokesperson Jeremy Kahn, “some of these inspections were conducted prior to the agency’s postponement of routine inspections.”

Ordinarily, the FDA inspects between 150 and 200 pharmaceutical and device facilities per month, based on an AgencyIQ review of inspection data from the last decade.

The decrease in inspections is likely the result of increased restrictions on domestic and international travel by the FDA.

The FDA has noted that it is making use of “alternative inspection tools and approaches while postponing domestic and foreign routine surveillance inspections.”

“During this interim period, we are utilizing additional tools and approaches to ensure the quality of products imported into the U.S. which have proved effective in the past,” Kahn told AgencyIQ.

“Specific examples of our alternative approaches include denying entry into the U.S. for unsafe and inferior quality products, physical examinations of products arriving at our borders or product sampling and testing prior to release into commerce, reviewing the compliance histories of facilities, using information shared by trusted foreign regulatory partners through mutual recognition and confidentiality agreements, and requesting records directly from firms ‘in advance of or in lieu of’ on-site inspections.”

That language—”in advance of or in lieu of”—is notable. Under Section 706 of the FDA Safety and Innovation Act of 2012, the agency was given the authority to access records held by pharmaceutical and device companies.

“Any records or other information that the Secretary may inspect under this section from a person that owns or operates an establishment that is engaged in the manufacture, preparation, propagation, compounding, or processing of a drug shall, upon the request of the Secretary, be provided to the Secretary by such person, in advance of or in lieu of an inspection, within a reasonable timeframe, within reasonable limits, and in a reasonable manner, and in either electronic or physical form, at the expense of such person. The Secretary’s request shall include a sufficient description of the records requested.”

That authority has been previously cited by the FDA as the basis for its proposed Quality Metrics guidance, which was ultimately not finalized following adverse feedback from industry and questions about the FDA’s authority.
In the meantime, the FDA said it is working closely with the CDC to determine when it can resume inspections.

However, the extent to which it can resume that surveillance may be in doubt. While the FDA may be permitted to resume inspections of firms based in the United States, similar restrictions on travel may limit its ability to inspect facilities in key regions, including China and India where some travel restrictions remain in effect.

The inspection data, analyzed by AgencyIQ, are from the FDA’s data dashboard inspections database, which does not include all inspections conducted by the FDA. It excludes pre-approval inspections and inspections waiting for final enforcement actions. The data only include facilities for which a final classification of compliance status has been received.

Another dashboard, the FDA’s Inspection Citation database, which looks at all inspections for which the FDA issued a citation, contained slightly different numbers about the number of facilities inspected. However, it also showed the FDA’s inspections to be at record lows in Q1 and March 2020 in particular.